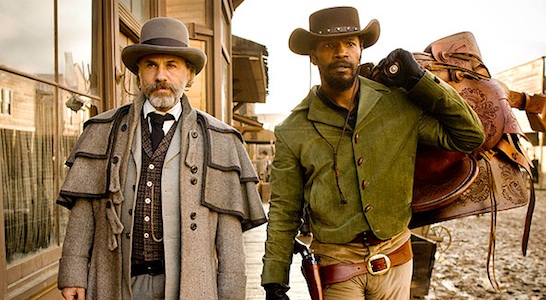 I saw Django Unchained and that leaves only Life of Pi among movies that I expect to impact my Oscar selections that I haven’t seen.

Let me go all Nate Silver and list my faves in order that I liked them, and my completely unscientific probabilities that they’ll win, with a little explanation.

Beasts of the Southern Wild. Crazy imaginative, well-done, moving. Loved it. Odds: 1 in 5.

Lincoln. It has Daniel Day-Lewis, Spielberg, and all those Academy Award nominations. But that opening 10 minutes, with the trainyard scene, were so forced and awkward, that I just don’t see it as the best film of the year. Odds: 2 in 5.

Zero Dark Thirty. Katherine Bigelow’s movie is super-taut and the last 45 minutes should be some sort of lesson in “just the fact, ma’am” storytelling. But there’s something empty at the core of the story. After three hours in movietime and a decade in realtime, I still don’t know what personally drove Jessica Chastain’s Maya in her unrelenting pursuit of OBL. She cries, and I really didn’t feel her tears. She needed some backstory. Or is that just me? Odds: 1 in 5.

Argo.  I can’t imagine this wins best picture, but it’s cleaning up in the preliminary awards shows. Odds: 1 in 5.

I enjoyed the first hour-plus, with Christoph Waltz moving everything along as the bounty hunter Dr. Schultz. But once the movie gets to the plantation Candieland, it gets very slow and cruel and bloody. Leonardo DeCaprio and Jamie Foxx are good in their roles, and director Quentin Tarantino is certainly accomplished, but the whole is less than those parts. For me, it’s Tarantino’s refusal to reel himself in: scenes go on forever, they’re not as funny as QT seems to think, and the gore, while cartoonish, is still excessive. I’d have much preferred a 2-hour, 10-minute version of this movie. Instead, I left feeling a little blood-soaked and exhausted.