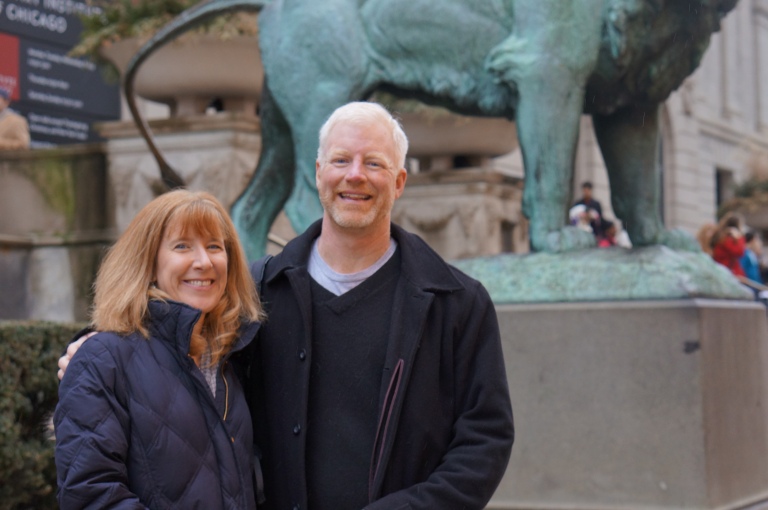 We had a great time celebrating our 21st anniversary, despite never seeing the sun. Thankfully the rain never got THAT bad.

Big thanks to everyone who made restaurant recommendations—and no, we didn’t eat at every deep dish place suggested. (We would have exploded.)

Bigger thanks to Kevin’s mom, who squired Kelly around this weekend, and the Alexanders, who took him in Friday night.

– Friday. Arrived via Southwest and grabbed dinner at a place (Cafe Spiaggio) that was expensive, but apparently is partnered with a place so ridiculously expensive that you are expected to feel at worst mildly violated. Nice meal, though, and Virginia loved her 3-gellato dessert. We walked the mile and a half home in the hint of a drizzle. You know one test of a relationship with some legs? You can walk a mile and a half in the damp of a place you don’t much know, and have a great time with the person you’re with. Done.

– Saturday. Museum of Contemporary Art and Navy Pier. We jumped on the El. Our legs breathed a collective sigh of relief. On Navy Pier, there is a stained glass museum, that apparently has no idea where any of its glass came from. Strange. That night we caught Dee Anderson and a backing trio at Jazz Showcase. That was fun. Walked home. It didn’t rain—much.

– Sunday. Took a trip to Frank Lloyd Wright’s home in Oak Park, a Chicago suburb. The trip was half the fun. The El is undergoing repairs on weekends, and there are some laughably complicated shuttle routes driving longtime riders crazy. The FLW house is amazing. But man, was he a handful! That night grabbed thin crust at Osteria, on State Street. Walked home. In a drizzle.

– Monday.- We were flying at 7:30, so we had the day to spend at Art Institute of Chicago. Awesome day. Unbelievable Picasso exhibit, and artwork by people that even Kevin has heard of. And we checked out the Bean, a huge piece of reflective  sculpture in Millennium Park. We walked back to our hotel at 4:30, in the … you guessed it! … and grabbed the Orange Line back to Midway. Flight was bumpy but on time. Home by midnight, Kelly snoring in his bed, and sweet dreams.

In front of Art Institute (with our amateur photog helper, who complained that what $$ I gave him wasn’t enough for dinner at McDonald’s)

Those are water lilies, up close, at Art Institute. 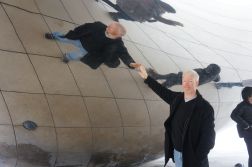 Touching myself at the Bean

The front of Frank Lloyd Wright’s home in Oak Park

Dee Anderson at the Jazz Showcase 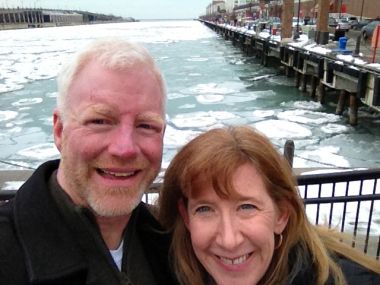 At Navy Pier. And they tell us it’s warm here. 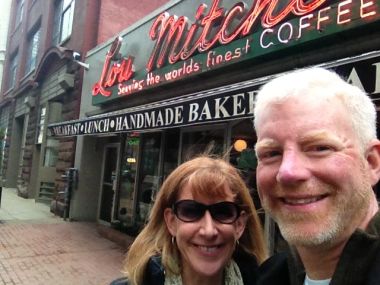 Had a fun brunch at Lou Mitchell’s, with some funky companions