I completed a weeklong service trip to Haiti on Saturday, and my head is still trying to make sense of all I saw and heard. Someday, I’ll try to turn the experience into a cogent post (or 10), but for now, I’m just going to share 17 photos and explain them as best I can. (The one above was taken from the van on our return to Port-au-Prince. Two of the things I noticed about Haiti was the fact that everyone walks along the country’s roads, and so much of the urban country is behind walls.)

We arrived at Port-au-Prince originally, then traveled 2 1/2 hours northeast to the Central Plateau, near the town of Hinche, where we were hosted by the Mouvman Peyizan Papay (the People’s Peasant Movement), led by Jean-Baptiste Chavannes. That’s him in the black shirt, showing us the gardens at the MPP compound.

Chavannes is an agronomist by training who grew into a social justice leader. MPP’s vision, among other things, is to build self-sustaining eco-villages, and to lure back people who moved to Port-au-Prince over the past two decades. That, in short, is “repeasantization.”

The tour ended with an amazingly candid talk about his—and Haiti’s—past, including his views on former President Jean-Bertrand Aristide (Chavannes said Aristide at one time called him brother but later was corrupted by power), the thought behind his movement, and his sometime difficult dealings with the government, including periods of exile and hiding and one time when he had 12 guns aimed at his head.

It was an extraordinary afternoon.

I took this at our work site, where we were helping lay the foundation for 10 homes that will makes up eco-village #5. I was taking a break in the shade of a storage building when I noticed the sideview mirror on a motorbike gave me a view on to the worksite. 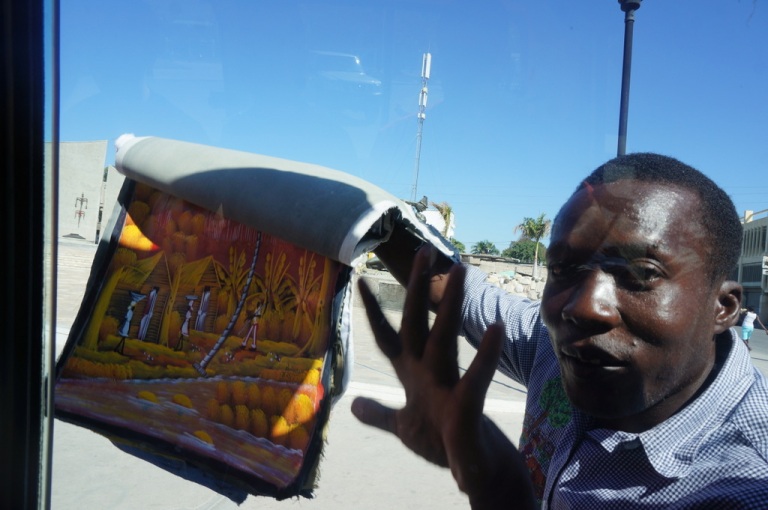 I went to Haiti thinking I would go and try to meet people as much as possible as person-to-person. But that is just naive; there is no escaping the imbalances of wealth and privilege that bedevil an American visiting Haiti. This was less true when we were with MPP, as we created relationships that could supercede this sort of “default” framing. Just about every interaction we had outside of our MPP bubble ended up influenced by the fact of American affluence. Traveling in the van was often another version of “the bubble,” largely because there was no relationship between those inside and those outside—but occasionally not, as when this gentleman popped up looking for a 5-spot for his painting on canvass. 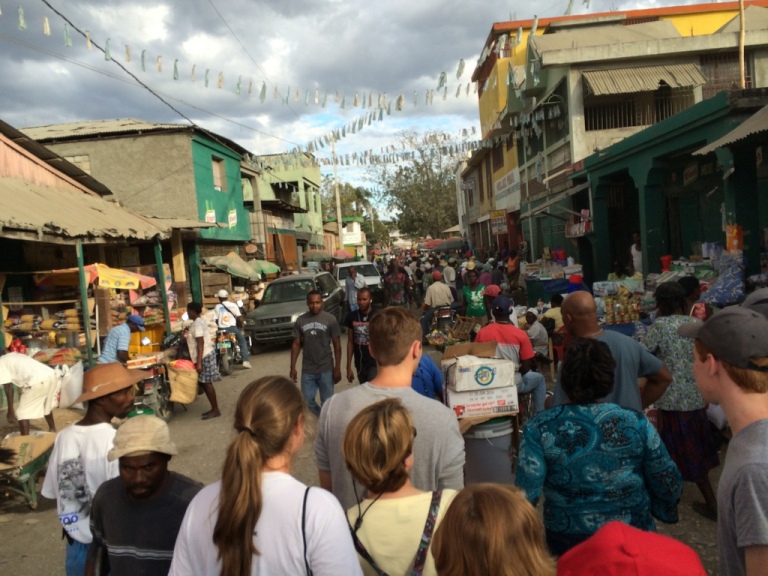 The busy streets outside the market late on an afternoon in Hinche, in the Central Plateau.

You can find fresh fruits and veggies at the market. In the countryside, there was a fair amount of fresh food. 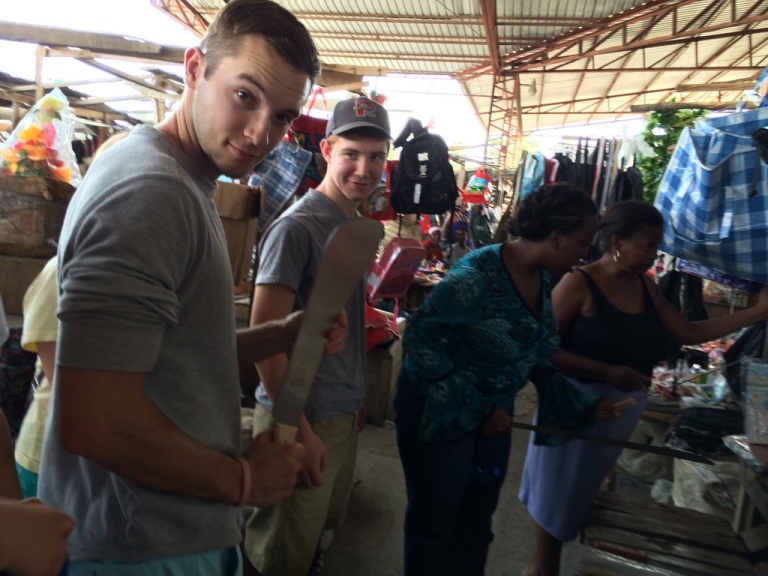 Kelly and his new friend David both were fixated on getting machetes while in Haiti—in fact, they came up with a list of more than 100 things one can do with a machete (from harvesting papayas to shaving, they had it covered). Their collective wish was fulfilled in the Hinche market. For inquiring minds, the going rate for machetes—at least those sold to American suburban teens—is $5. These had very dull edges, so there was little danger of injury. Thankfully, there were no questions in customs.

The Catholic cathedral in Hinche. Pretty building, though the gates were locked on a weekday afternoon. About 80% of Haitians identify as Catholics. 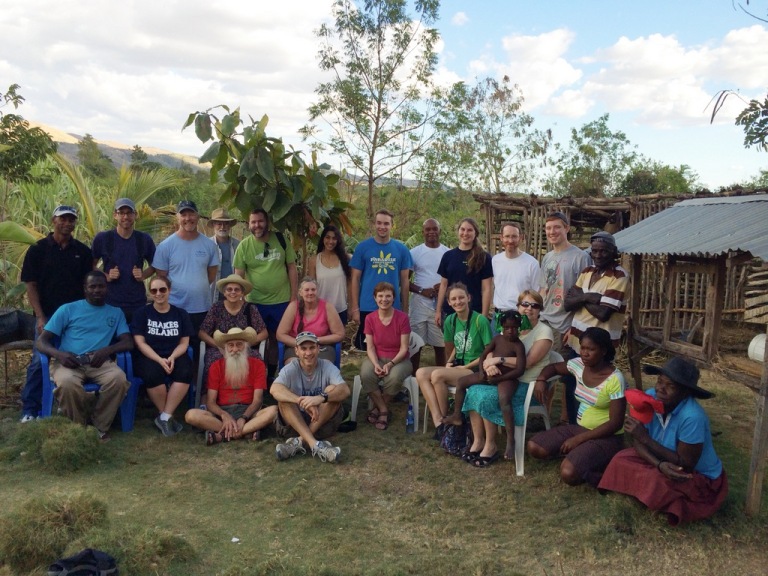 We visited a young farmer who is also a member of MPP. That’s him, sitting to the left, front row. His name was Maccenje. He worked very hard, had more than three dozen tires he used as improvisational raised gardens (an MPP staple), and had planted trees throughout his property. Trees are a big issue in Haiti, as the land has been thoroughly denuded and the need for wood to cook far outstrips conservation and planting efforts. I sent this photo to Maccenje so he could post it on his Facebook page. I kid you not. 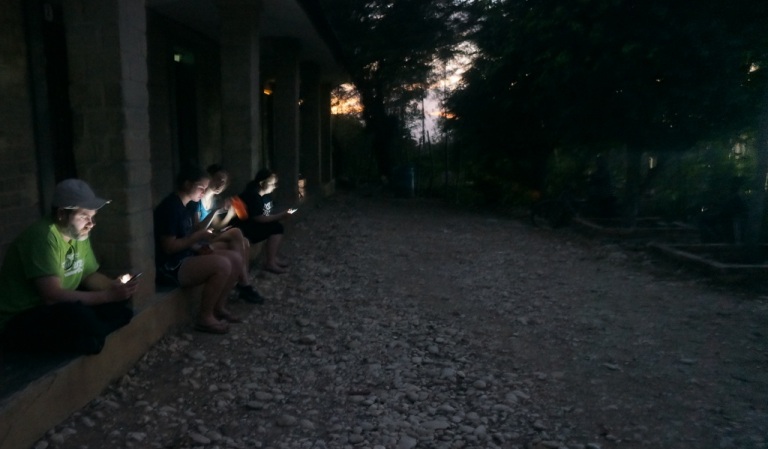 There was wifi at one end of the compound, and there were ritual checkins throughout the day. This photo makes me wish I was a better photographer, to get the lighting a bit better. But you get the idea. 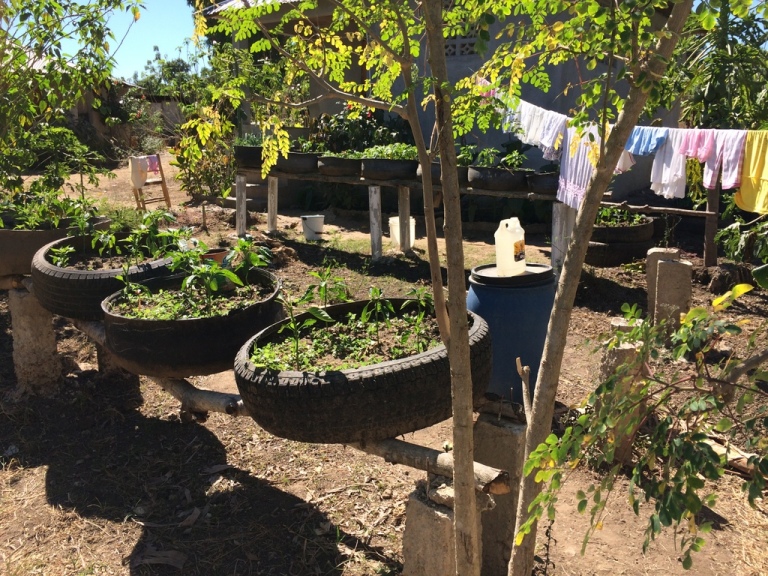 These are tire gardens in eco-village #1, which we visited on our last full day in Haiti. I loved how green EV-1 was, with trees that afforded shade and an abundance of papayas. But the green-ness wasn’t the whole story. When we met with the 10 families that live there, they were interested in having more services nearby—especially health and education—and said the farming life was very hard.

The work sites were a lot of work, but folks had fun, too—dancing, singing, and fooling around. Here, two of our youth dance with team co-leader Mike Carpenter, of Main Line Unitarian Church.

Sometimes the fun spilled outside the work site. I took this photo in Hinche, and the guy in the middle is minister Evan Keely, doing his best Caribbean island strong man imitation, complete with machete-wielding body guards. A little irreverence was a good tonic from time to time. 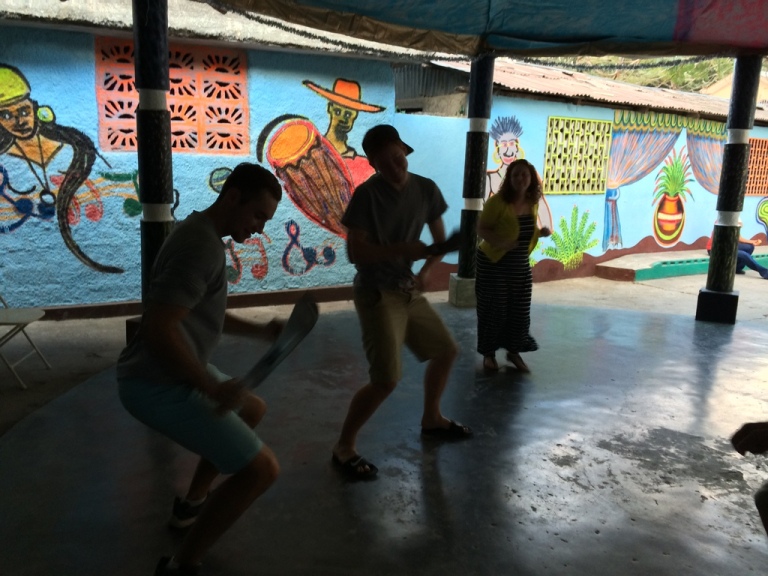 The boys dancing with their machetes in a Hinche bar. They were largely alone on the dance floor, thankfully.

These are the children of EV-1, who coveted our plastic water bottles as toys. They have sufficient water from a nearby well. 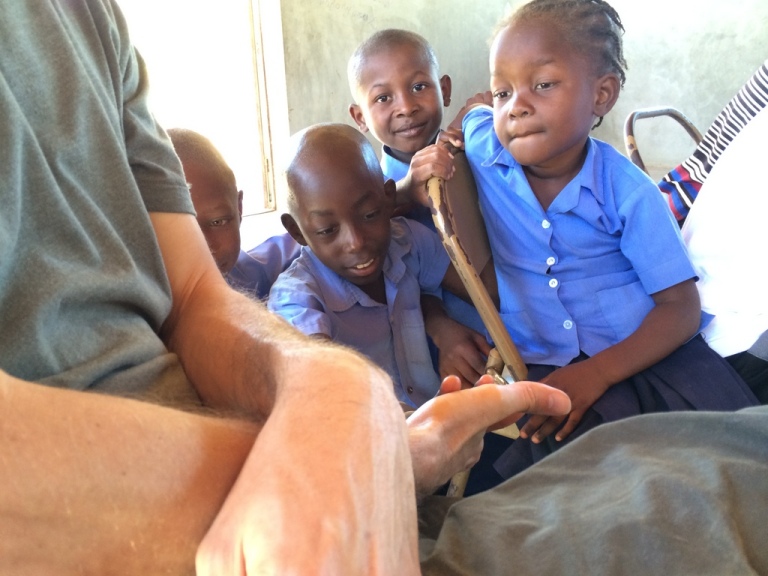 One more of the children. There are 32 of them in EV-1, among 10 families, and there were quite a few newborns. When we asked why one would choose to live in the eco-villages rather than in Port-au-Prince, the moms said it was safer in the countryside. They feared their kids being caught in a crossfire or assaulted back in P-au-P.

We were walking through EV-1 when I looked down and saw a small toy Santa Claus that looked a lot like our team leader, Mike Carpenter. “Mike, they’ve got a doll of you here in Haiti!” Tell me I was wrong?

That’s a start on my trip. More to come.

One Reply to “My 17 Favorite Photos from Haiti”