The last few years my Audible listening had been dominated by big book series—J.K. Rowlings’ Harry Potter and George R.R. Martin’s A Song of Ice and Fire (Game of Thrones). I didn’t have any such book series this year, but the year was dominated by two things:

In the second half of the year, I listened to more fiction, which I find to be a better genre for Audible than non-fiction. The flow of being told a story—even a modern, disjointed timeline like that in A Visit from the Goon Squad—is easier to follow than plowing through a historical list of places, names and dates in non-fiction. Though I keep doing regardless—right now, I’m listening to a long book on The Reformation.

Anyway, here’s my list, pretty much in order it was listened to: 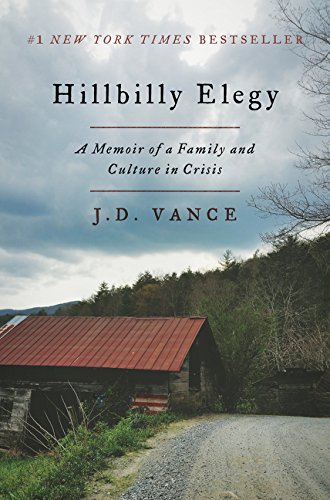 Hillbilly Elegy: A Memoir of a Family and Culture in Crisis, by J.D. Vance

After the election, J.D. Vance became the designated spokesperson for Appalachian America, which is funny, because he did most of his interviews from California, where he worked for a Silicon Valley VC firm (he recently moved to Cincinnati, close to his southern Ohio hometown). The most resonant part for me was the description of his Mamaw (grandma), whose fierce determination that he find a good life sat at odds with her own embrace of outrageous behavior and suspicious worldview that made such a life almost impossible. The lesson I took from the book is that, in these circumstances, it takes a person as formidably disciplined, smart, and well-intentioned as Vance to manage the leap to a better life—and that this truth is awful news for the vast majority of folks without these gifts. Also, that the Information Economy runs on education and educated people, and these were, and are, in short supply in Vance’s hometown and the region. Until that changes, and until resentment isn’t the first order of business for people there, things aren’t going to change much in Appalachia.

The Agony And the Ecstasy: A Biographical Novel of Michelangelo, by Irving Stone

I know that more recent scholarship paints a picture of a more difficult, and more sexually fluid, person, but I really enjoyed this (long) book nonetheless. I remain in awe of his life and work. The work is, in a word, amazing. The scale of, say, The Last Judgement in the Sistine Chapel (or heck, the chapel in whole) boggles my mind. His Moses sculpture in the Church of San Pietro in Rome looks as if it could stand up and immediately kick ass in a WWE event.

Astrophysics For People In a Hurry, by Neil deGrasse Tyson

You’d have to be in a very big hurry to find this book useful. The author narrates his book (as does Vance, above) and sometimes I felt like he must have spent more time on he narration than the actual writing. Find a little more time and read something like Bill Bryson’s A Short History of Nearly Everything instead; you’ll be better for it. 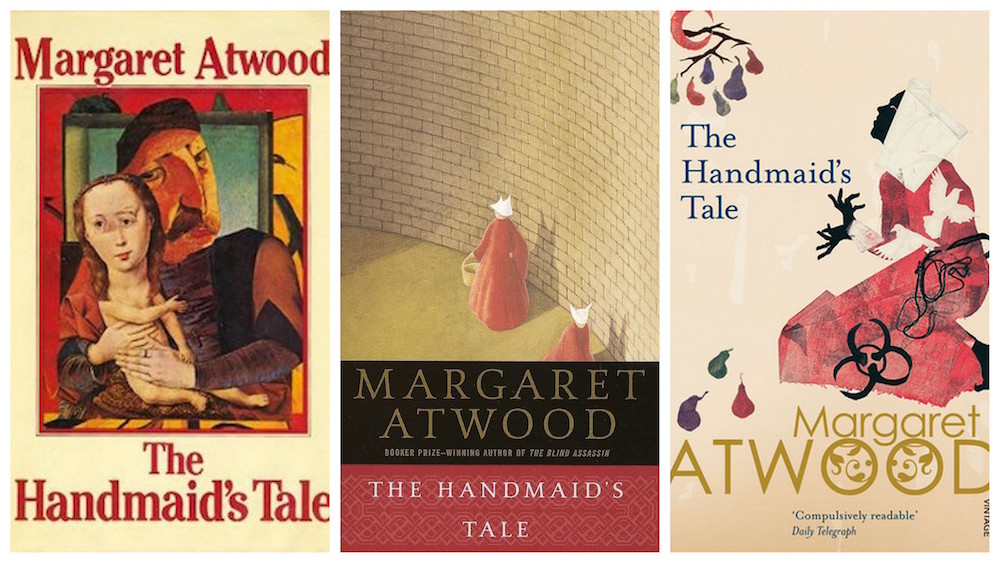 The Handmaid’s Tale, by Margaret Atwood

The anti-women rhetoric of the election and the power of the Women’s March served as a bracing tonic before listening to Atwood’s story, and I read it with the sense that, while not close to this world, we’re closer than we have been in a long time, that the forces that could make such a thing possible are on the ascent. The attempts to negate coverage of women’s health procedures in the debate over the ACA is just one of many data points that this didn’t change as the year progressed. The story feels so relevant. Plus, Atwood is an excellent writer/storyteller. And no, I haven’t watched the Hulu series yet (no Hulu). 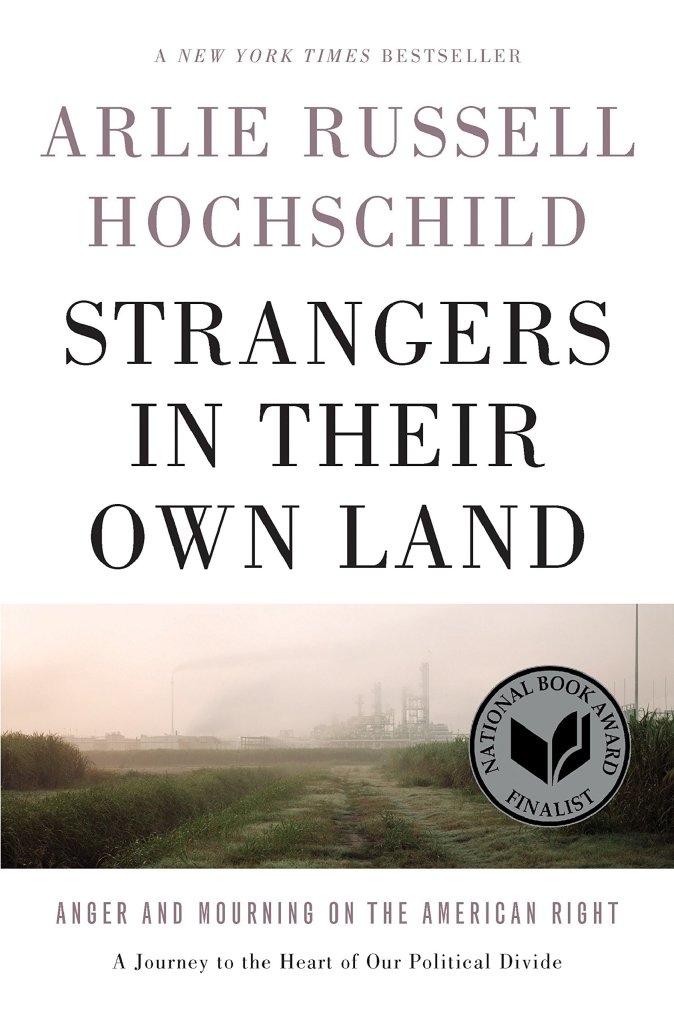 Strangers in Their Own Land: Anger and Mourning on the American Right, by Arlie Russell Hochschild

This was an illuminating book that helped me to understand why people vote so directly against their interests. The short answer seemed to be: Fox News. The longer one involves a metaphor the author, a UC-Berkeley prof who spent several years in a Louisiana bayou parish, developed from many interviews with the people there—one in which people feel as if they are standing in a long line awaiting the American dream and can see (less worthy) others cutting in front of them while their relative position isn’t improving. It also was very explicit about the environmental compromises the subjects were willing to make for jobs—even as it poisons them, their families, and the places they love. It was a bit of a slog, but glad I listened.

Notes Of a Native Son, by James Baldwin

Listening isn’t the best way to digest Baldwin’s rich, meaty essays—I often felt like I could spend 15 minutes trying to understand all the veins of thought captured in a single phrase or sentence. Even so, Baldwin is so smart and his observations of America so spot-on (even 63 years later) that I’d keep hitting the 30-seconds-rewind button on my phone.

We Were Eight Years in Power: An American Tragedy, by Ta-Nehisi Coates

This compilation of Coates’ articles from The Atlantic would be OK if it was only that, but what makes it really good is the essays he wrote that fill in the spaces between the already-published pieces—Coates looks back at the years of the Obama Presidency and offers some fresh insight into the strengths and weaknesses he now sees in his pieces and their arguments. That was really good. And even if you don’t read or listen to this book, you need to read The Case for Reparations. I bridled at the term, but Coates is persuasive that there is an obligation to right this monstrous, so-big-it’s-almost-incomprehensible wrong. As a white person, the historical record makes me feel a bit like writing a check and then jumping off a cliff.

On the lighter side, Coates recently spoke to Bill Simmons on this podcast, and dropped the nugget that he thinks he might be up for a change to writing fiction—as well as arguing with Simmon about the best season of “The Wire.” Mostly I walked away from the podcast with the sense of just how wearying it must be to be the public voice for any cause. And that’s a shame, because Coates is intelligent with a mastery of his facts and style. He is a worthy successor to Baldwin, and Coates’ fatigue points to how special Baldwin was. (Of note, Baldwin was 31 when he wrote Notes of a Native Son in 1955, and he died in 1987, at age 63. Coates in 42.)

A Visit From the Goon Squad, by Jennifer Egan

Where to even start. Egan’s breakthrough novel loops and winds the lives of aging recording exec Bennie Salazar and his assistant Sasha, going backward and forward and through all the feelings—satire, tragedy, there’s even a chapter in Powerpoint. Super-enjoyable, it made me want to read Egan’s newest book, Manhattan Beach, which was thoroughly enjoyable. Both tapped into this deep mystery about the glory and folly and will and accident that transforms people’s lives.

By the author of The Martian (which I haven’t read but really enjoyed the movie), this story happens on Artemis, the first and only city on the moon, where a young woman smuggler gets caught up in industrial espionage scheme that leads to murder and unexpected repercussions. It’s geeky and snarky and I can’t quite say I liked Jazz Bashara, which was OK. 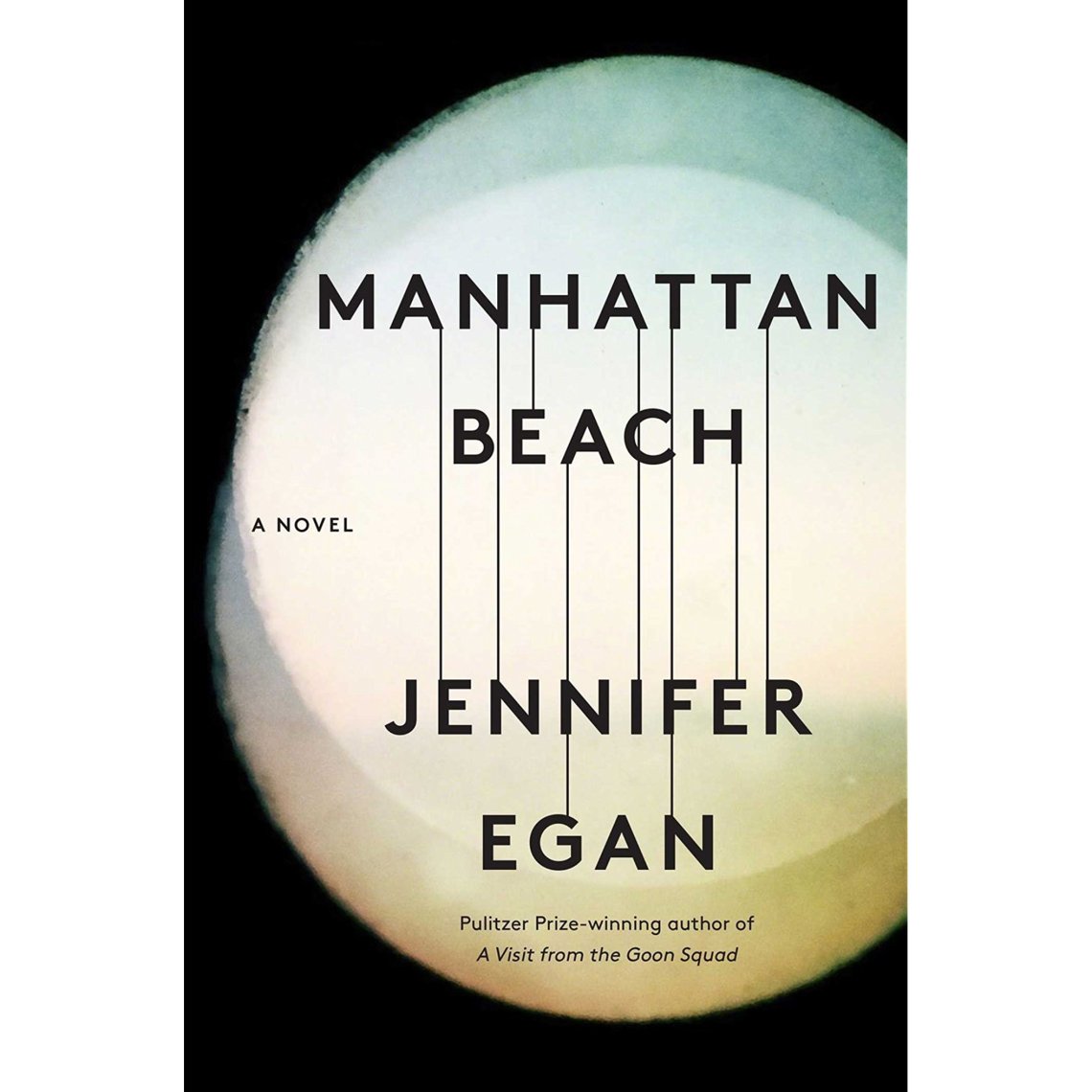 Set in wartime New York City, this novel is about a young woman who wants to be a diver, her disappeared dad, and the gangster that connects the two. Egan is the real deal and this was a super read.