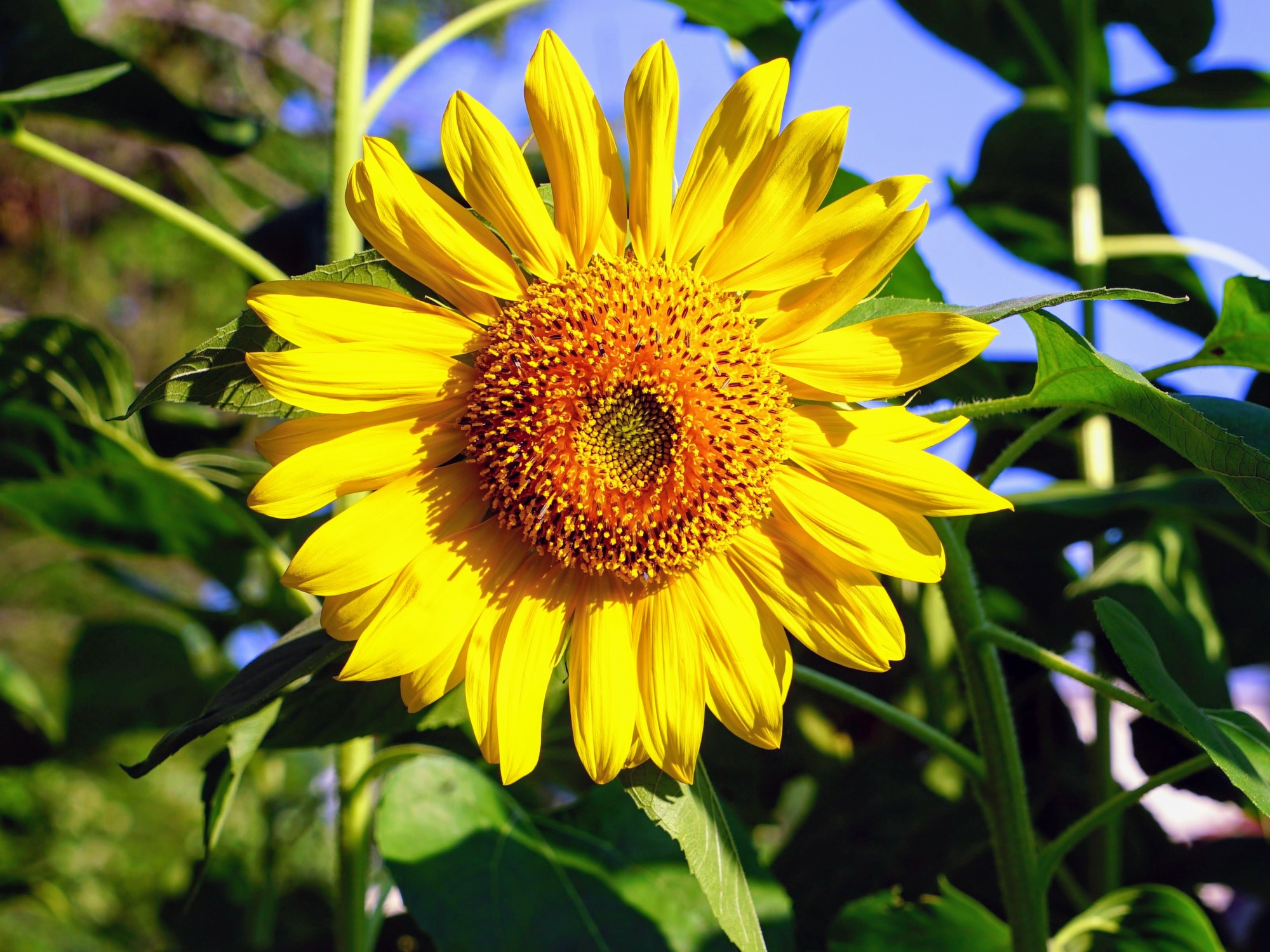 I’ve never been much of a flower person. I’ve let Virginia do the work of encouraging things to grow and be beautiful, and I water, yank up weeds and prune when things get unruly. But last year, I decided to try my hand at it. I dug out a garden in our backyard and planted a bunch of sunflowers.

It was a disaster. The ground I chose was wet and the soil poor. We’ve been told that our yard was once a junkyard and I believe it; when it rains enough, you’ll see a sheen of oil pool on the standing water like something from The Beverly Hillbillies. This is not rich soil, though a business called Soil Rich sits behind the treeline in our yard. The few plants that grow even a few inches tall have been consumed quickly by various critters.

This year, I decided, would be different.

And it paid off. The darn things grew. Within a week of planting, we had seedlings. They grew into shoots, then just kept growing. Two feet. Three feet. Four feet. Six feet.

The seed heads began to develop and I anticipated all the fun of a late Summer of looking at them lording over our backyard. And when they bloomed, they were magnificent. I was loving it.

But there’s always a but.

And in this case, the but is this moment of Sunflower Maximus was short-lived. The first to bloom was a harbinger of doom. After two magnificent days, it began to droop. Then wilt. Then the head deteriorated quickly. The seeds never had time to develop, and it was over. The rest of the sunflowers, all two dozen of them, followed a similar arc. Spectacular bloom, sagging under their own fecundity, followed quickly by decline and deterioration.

In the end, a late summer tropical storm pumped too much water into their stalks and the overheavy heads snapped the stalks and the squirrels gleefully ran up and down their 12-foot lengths. I ended up asking my son Kelly to go and pull them out. I didn’t have the heart.

The lesson for me was one of balance. The sunflowers grew tall, bloomed big, and declined quickly. I’m 54. I fear a similar flowering. The good thing is, I’m a person, not a flower, and I have some say in the matter. If I grow, how I grow, includes some level of choice, and go big, and go home early is an end I am not willing to court. I’ve known this for a while: I’m willing to exchange size for sustainability.

It’s worth noting that we’re about five years to the day from the time I had an operation in which a surgeon placed a stent in my heart. I have been reading my journal entries from when I first noticed that something was happening in my body. When I realized I might need some help. When I realized how close I came to being beyond help. It was a good lesson in things don’t last forever, that the sustainable route is the one that doesn’t fight against physics. That lasting is a good thing. That a bunch of smaller, gorgeous flowers are more than enough in any garden.

So, next year: It will be different. More varieties. Plants with multiple heads, so none are so large as to endanger the stalk’s integrity. More locations around our yard.

Sunflower 3.0 will be an experiment in variety and resilience. Kevin 2.0 remains a work in progress.